I made a tw strategy map with microsoft paint... 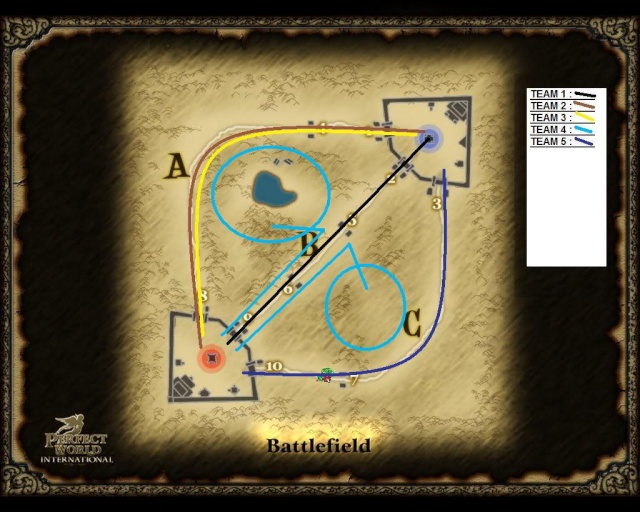 at the same time team 4 will go ahead of team 1 and run right at the main enemy force... and when they see you they will ready themselves for combat and be fixed on team 4, the first people they see.. then team 4 will scatter to the sides... lots of the enemies will go after team 4 thinking that they're running off to get a vantage point and any others that are left will be taken out by team 1 as they pass

at the same time team 5 the spare team with mostly lowbies will act as a scout to see if the enemy is using a similar strategy to send pullers down that side, and if they are they will scatter like team 4 and lead as many to follow them as possible... the enemy pullers will continue on with their guards cut in half or somewhere near that, and we will focus our defenses on that side

having all 3 paths checked and packing our defenses in the right spot using vent will insure that we push them back.... eventually we will get to the point where we all can safely meet inside their base... when this happens we wll have the lowbies stationed outside the base to let anybody know if some escape... we will be able to cut our defenses down a little bit and send half of them to help with the crystal and help keep the enemy pinned down...

I will need enemy info if I am going to make a more complex plan... and the info of our participating people... I am good at planning when given the right intel


reply with your own battle strategies